Life after Brexit – low-carbon environmental legislation, green jobs and growth? IEMA’s Martin Baxter is coming to share his views with us on progress and future Government plans. There is optimism but a great deal still to be done at a time of costly business uncertainty.

Back to a sustainable future

Also in the near future, in the first progress report on a major economic and political regional initiative, Chamber CEO, Miranda Barker will explain how the new Lancashire Industrial Strategy is being designed to pick up where Whitehall and any newly-elected Government leave off.
Together, Martin this month and Miranda next month will give us a valuable snapshot and a long-term practical roadmap leading to a sustainable, stable and commercially-successful regional and national economy.

Meanwhile, despite daily dramas and changes, Thursday 31st October remains a red-letter Brexit day in many business diaries.
Most appropriately, the Institute for Environmental Management & Assessment’s (IEMA) Chief Policy Advisor has chosen to join us at Clayton-le-Moors to outline his candid inside-track expert views of upcoming UK environmental policy – just five days before Guy Fawkes Night!
To meet Martin and hear him speak at our Environmental Policy Update meeting from 10:00 am to 1:00 pm in the Mercure Blackburn Dunkenhalgh Hotel and Spa, Blackburn Rd, Blackburn, BB5 5JP, please register at https://www.eventbrite.co.uk/e/environmental-policy-update-tickets-70282842875.

An Act caught in the middle

With the Government’s draft environment bill now potentially “marooned” in Parliament ahead of a general election, Martin’s robust assessment of UK sustainability will be an important signpost.
Over the summer, he responded to Michael Gove’s updated thinking on how the Act will turn out –Mr Gove at the time was Secretary of State with responsibility for the Department for Environment, Food and Rural Affairs (Defra). Martin believes there is still “a way to go” to ensure that, firstly, any new post-general election Government adopts Mr Gove’s July clarification as the core governance framework for the Bill, and, secondly, that it “survives Parliamentary skirmishes and Brexit”.
However, he also commented that, “… this feels like an important step forward,” adding that the “forthcoming Environment Act provides an opportunity to significantly improve our natural world and put sustainability at the heart of our future economic model”.
IEMA was pleased that the approach it has advocated to Government for a long-term policy framework to create investor confidence in a sustainable future had Mr Gove’s support. IEMA also welcomed the addition of a long list of topic-specific commitments to nature’s recovery, air quality, water, resources and waste.

A summary ahead of the 31st

As a primer for 31 October, Martin’s detailed seven-point summary references to Mr Gove’s July response are listed at the end of this blog.
But before that, a number of other events and developments have been helping to shape the low-carbon agenda recently.

From 28 October to 3 November, the Circular Economy Club globally will celebrate its first “Circular Cities Week”. The crucial aim is to push for city circular economy strategies worldwide. This also potentially ties in with the Lancashire Industrial Strategy development. Coincidentally, the UN’s World Cities Day is on 31 October.

A recent YouGov survey of 502 UK businesses finds almost half now aim to be carbon-neutral by 2030. Some 93% believe climate change is real, driven fully or partly by human activity. In answer to the question: “Is your business planning to be net-carbon-neutral?” 46% say they have publically or internally published plans.
Circa 5% say this is feasible in the next year, although most foresee a two to five year timespan. A further 8% say they are already carbon-neutral, probably based on buying carbon offsets. Aldi UK and Marks & Spencer say they have achieved carbon-neutrality.

Now we know that the good Earth contains 1.85 billion, billion tonnes of carbon, of which more than 99% lies beneath our feet. A ten-year research project by the Deep Carbon Observatory has looked at carbon “reservoirs and fluxes” – where carbon is held and how it moves through the planet. Only a fraction affects climate change, it says; most is deep within the crust, mantle and core.
Even so, carbon’s mobility has huge importance for the climate and habitability of the surface environment, scientists add, even though only 43,500 billion tonnes – 0.2% – are above surface in oceans, on land, and in the atmosphere. One interesting fact from the work is that “ten-years of human CO2 emissions are roughly equivalent to an asteroid impact”.

On another very practical note, a Dutch company linked to Delft University of Technology is planning the world’s first commercial production of jet fuel made partly from carbon dioxide.
Based on Rotterdam Airport, it will capture CO2. Separately, water will be split into hydrogen and oxygen by electrolysis using solar panels. Mixing hydrogen and CO2 forms a syngas that it is said can be turned into jet fuel. A pilot plant at the airport will produce 1,000 litres daily, though as yet it is not commercially competitive.
However, there is still concern that the logistics on an aviation-industry-wide scale don’t add up. “I’m very sympathetic to all the reasons why we need to fly around the world but climate change isn’t [sympathetic], and it’s accelerating at a rate that’s terrifying,” explains Friends of the Earth’s Ms de Lege. “The only solution we have is simply to be flying less,” she adds.

Martin Baxter has a considerable reputation as a UK and global supporter of the low carbon transition, greater resource efficient and a sustainable economy. He is also a media sustainability spokesperson who networks regularly with senior politicians, Government officials, plus business and academic leaders.
Martin is intimately involved with developing and negotiating global and European standards, plus their implementation, chairs the International Organisation for Standardisation (ISO) sub-committee on environmental management systems, and as head of the UK delegation represents the UK on the European Commission Eco-Management and Audit Scheme regulatory committee.

Regulatory successor to the EU

The current Defra Secretary of State, Theresa Villiers, has underlined the importance of passing the Environment Bill, pledged to continue much of Mr Gove’s work, but also said in September that the Government cannot rule out diverging from EU environmental laws transposed into UK law.
She added,” I hope to be able to put my own individual stamp on some of these important projects as well”.
However, when he set out his thinking on Tuesday 16th July, Mr Gove spoke about key aspects of the Act’s governance framework that relate directly to assurances IEMA has been advocating as part of the Broadway Initiative. Broadway brings together a cross section of stakeholders and recognised experts to generate ideas and world-leading post-Brexit arrangements.
Many people sense a post-Brexit opportunity; the Government says it wants the UK’s new environmental regime to be as good as – and better than – that developed in 40 years with the EU.
The Environment (Principles and Governance) Bill introduced to the Commons in December 2018 is meant as a framework for a new Office for Environmental Protection (OEP) watchdog for England that should also put the Government’s 25 Year Environment Plan on to a statutory footing.
Martin has commented in the recent past that IEMA sees opportunities to change a system that is “unnecessarily prescriptive, compliance driven, reactive (rather than strategic) and a complex approach to the environment”, plus “poor at anticipating new issues” – such as single-use plastics and low air quality.

However, many organisations, including IEMA, have felt that existing proposals are “not world leading yet”, “EU-lite” and too weak to replace the powerful European Commission/European Court of Justice structure that currently enforces environmental governance in the UK.
As promised, the following are highlights from Michael Gove’s July statement which Martin felt at the time were particularly significant to a low-carbon environment and should still apply: –
1) “… the Bill will ensure that, for the first time, we in the UK take a coordinated, long-term, system-wide approach to the environment … set the world’s first legally-binding commitment to comprehensive environmental improvement in the areas where we as a country can make a decisive difference – air quality, water management, waste reduction and wildlife revival.”
2) “… the Bill must create a robust, legally sound, framework for a comprehensive and integrated set of environmental targets which taken together can ‘bend the curve’ on environmental decline. And to ensure that the targets are informed by the latest science and evidence, we must make arrangements for independent, authoritative advice on the level at which they should be set … ensure all our targets are robust, underpinned by the best available evidence from science, that they are developed holistically and Government is then to be held to account for meeting them.”
3) “… the Environment Bill should learn from the success of the Climate Change Act. It set a clear double duty: for the Government to achieve its climate change aspirations, and to publish a plan for doing so ….and that is what our Environment Bill must have.”
4) “… of course, any law is only as strong as its enforcement…that’s why to underpin our commitment to change, we have to create a new Office for Environmental Responsibility to hold government to account. Compelling arguments of how to ensure its teeth are properly sharpened and united in proposing a truly independent governance structure for the OEP … obvious merit that anybody which is designed to hold the Government to account is independent of ministerial interference. Offering Parliament the chance to have a say in crucial appointments of senior officers it is also underpinned by upfront, multi-year budgetary guarantees.”
5)”… in enforcing climate change law as well as wider environmental law the case is compelling…convinced that if we want a watchdog with teeth on every environmental issue it should be able to bite on climate change.”
6) “An Act that combines compelling and comprehensive objectives with strong enforcement powers and policies to drive innovation and investment will, I hope, enable us to demonstrate appropriate leadership.”
7) “… there will be a legal obligation for all Government policy making to pay due regard to a policy statement which will outline the core principles of environmental protection: a precautionary approach; the principle that the polluter should pay; the principle harm should be prevented or rectified at source; and environmental considerations should be integrated across government policy areas. This will constitute a baseline – against this greener backdrop, we can strengthen and reform our approach where we can make the biggest improvements.”

Our October Environmental Policy Update meeting should be a memorable event!

Are you developing a new piece of low carbon technology, or a product/idea which will reduce carbon emissions? Free consultant support is available to help get it to mkt, see it manufactured locally & find yr target customers info@chamberlowcarbon.co.uk #innovation #Lancashire 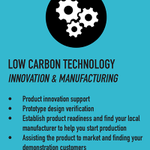 Join us on Thursday 12th November 12-1:30pm for our LIVE Lunch & Learn on Bees & Biodiversity with Simon from the Bee Centre () Book your place online now https://www.eventbrite.co.uk/e/chamber-low-carbon-live-lunch-learn-bees-and-biodiversity-key-workers-tickets-122377166399?d #biodiversity #environment

The Bee Centre is a centre of excellence for bee-related education, breeding and husbandry, aimed at educatiion and ethical beekeeping.

Targets for Green Growth – setting the targets under the Environment Bill

The Broadway Initiative in partnership with IEMA and the Aldersgate Group invites you to join the public conversation on Targets ...