Join us for this Free lunchtime workshop in Accrington to find out why now is the time to embrace renewable energy and the fourth industrial revolution. Learn about the challenges and opportunities for business in with the region’s zero-carbon agenda.

Topics to be covered:

The session will be led by Charley Rattan who is a renewable energy strategist and corporate trainer who has previously worked for SSE, EON and Shell. He has led or risk managed offshore wind farms at Islay and Seagreen, and has clients which include Canadian corporates and the US government. Charley is passionate about encouraging local North West based supply chain companies to engage with the offshore wind industry.

The event will start at 12:00 with lunch and networking, with the session starting from 12:30. Following the session there will be plenty of opportunity to ask questions and for further networking over refreshments.

The Chamber Low Carbon team will be on hand to discuss the support and funding available through the Low Carbon programme.

This workshop is part of a regular Lunch & Learn series giving Lancashire businesses the knowledge and tools to go green. To keep up-to-date with further workshops subscribe to the Chamber Low Carbon newsletter.

Brought to you in partnership with Chamber Low Carbon, The Centre for Global Eco-Innovation, Lancaster University, The MaCaW Project, University of Central Lancashire and The Knowledge Transfer.

There is a wealth of support available across the county for Lancashire based businesses to help them save money, develop new technology and reduce their carbon footprint.                                     To help you understand how your business could benefit, the three low carbon projects, all part-funded by the European Regional Development Fund, have come together to host an event designed to give you a flavour of what’s on offer and how you can get involved.

Following the briefing there will be a chance to network with your fellow delegates and experts.

The event will be hosted by Andrew Leeming, Boost Programme Manager, Lancashire County Council. All low carbon teams will be on hand to discuss the support and funding available through each programme.

A small island versus a heating world

Nov 2,2018 Comments Off on A small island versus a heating world By Carol Black

Last chance! We must cut carbon emissions to the bone in 12-years to avoid an unbearably hot planet UN climate scientists now warn. Responses from the world’s largest carbon emitters have been “cool”. Can UK companies make a significant difference? The answer is yes on several levels.

The climate battle is about to become personal

What leading climate experts gathered at a UN Intergovernmental Panel on Climate Change (IPCC) October summit in Incheon, South Korea actually said is that limiting global temperature rises this century to no more than 20C will no longer keep us out of danger. We’ve already put too much carbon into the atmosphere.

“Rapid, far-reaching and unprecedented changes in all aspects of society” are now vital to hold rises down to a much more demanding 1.50C maximum. This means reducing greenhouse gas (GHG) emissions far more rapidly than thought necessary three years ago. The human species hasn’t been trying hard enough!

Worse still, the IPCC team calculates that the earth is currently heading towards not just 20C but a catastrophic 30C rise which will affect global weather, food chains and sea levels, cause extreme drought and flood events, and damage human health, commerce, economics and biodiversity.

Can we rise to this challenge? Yes, they say. But it means monumental changes now and far into the future on the part of governments, corporations, ordinary businesses … plus each and every one of us as individuals.

It will also be horrendously costly. Meeting the 1.50C target will need an average annual investment of some $2.4 trillion up to 2035, or 2.5% of global gross domestic product (GDP). The longer we wait, the higher the price-tag will be. Why? Because we will then have the additional problem of pulling earlier emissions back out of the atmosphere on an enormous scale.

UK versus the world

The response of the world’s largest carbon emitters – China, the US, India, plus Australia – is not particularly encouraging. Which begs the question of whether low carbon programmes on a small European island like the UK can deliver the innovations and low-carbon breakthroughs needed to make a real difference?

Before looking at this part of the programme in greater detail, a quick world overview illustrates the size of the problem the IPCC has identified … and potential opportunities.

Still kicking the can

China – Recent satellite imagery shows that while China’s central government has issued suspension orders for more than 100 coal-fired power station, almost all have gone ahead. The reason given is that local Chinese provincial authorities now have planning powers and are loathed to close down economically active projects.

China has 993 GW of coal power capacity and plans to increase this by some 25% to 259GW. The International Energy Agency (IEA) says that to meet a 1.750C warming target, China would have to close all plants without carbon capture and storage (CCS) facilities in 30 years.

Down under – Australia’s largest export is coal as the world’s 13th largest emitter – China is number one. Some 60% of its electricity comes from coal, plus 50,000 jobs. Political reaction to the IPCC’s findings was stark. Deputy PM Michael McCormack confirmed that Australian coal policy won’t change, “just because somebody might suggest that some sort of report is the way we need to follow and everything we should do”. Environment minister Melissa Price added that the IPCC was “drawing a long bow” in calling for coal use to end by 2050 and be replaced by new low-carbon technologies.

India – Australia’s coal problem is partly-Indian. The Adani Group is struggling to develop its controversial $16 billion Carmichael coal project near the World Heritage-listed Great Barrier Reef. It expects a six-fold rise in output by 2021. Exports will then fall.

India itself is in flux over carbon, cars and coal. It wants to put low-cost cars within the income range of ordinary families but also move swiftly to renewables and electric vehicles (EVs). Most Indian coal plants breach the country’s air pollution standards; many are expected to close by 2027. Meanwhile, annual demand is still rising, making India the world’s third largest GHG emitter.

US – As head of the world’s second largest GHG polluter, President Trump no longer believes climate change is a hoax but says climate change scientists have a “political agenda”. He says warming is cyclical and doesn’t want to “spend trillions of dollars and lose millions of jobs by cutting emissions”.

What has changed so suddenly?

There has been a sea-change in three years. The received wisdom since December 2015’s UN Paris climate summit has been that the maximum additional surface temperature rise the world can take relatively safely is 20C. That diagnosis has changed. In a 33-page Summary for Policymakers, the UN Intergovernmental Panel on Climate Change (IPCC) (http://un.org.au/2018/10/08/summary-for-policymakers-of-ipcc-special-report-on-global-warming-of-1-5c-approved-by-governments/ & https://www.ipcc.ch/sr15/) spells out clearly that 1.50C is now the maximum.

Half a degree may not sound like much. But the report says it will make a traumatic difference to how we live. It means saying goodbye to red meat, milk and dairy products, sourcing seasonal food locally, throwing less away, using washing lines rather than tumble driers, walking, cycling or driving “clean” EVs when possible, using trains and roads rather than planes if we must travel, video conferencing more, buying less fast fashion, wearing sweaters in winter and insulating buildings. In short, a ground-breaking cultural shift – although no-one has suggested virtual holidays – yet!

The IPCC says there must be rapid and significant changes in four big global systems: – energy, land use, cities and industry. It does not tell governments what to do but does suggest scenarios.

It believes the situation is now so dire that the 1.50C target will be breached around the year 2040 without gargantuan global efforts. After that we will depend on technologies that can claw carbon back out of the atmosphere at huge expense. That means planting billions of real trees, manufacturing “artificial” trees and using untested mechanisms still on the drawing board. Some changes will be irreversible. It is better to cut faster and deeper now, the IPCC says.

The Prime Minister says the UK intends “to legislate for a net aero emissions target at an appropriate point in the future” and joined 18 other nations in signed up to the Carbon Neutrality Coalition at the UN General Assembly’s 73rd session in New York recently.

Business, energy and industrial strategy minister Claire Perry describes the IPCC report as “a really stark and sober piece of work”. She adds, “The question is: what does government need to do, where can the private sector come in, and what technologies will come through?”

She has also asked the Committee on Climate Change (CCC) to show how the British economy – from homes and transport to industry and agriculture – can become zero-carbon as soon as possible. She questions whether the UK’s existing commitment to an 80% GHG cut by 2050 below a 1990 datum is still sufficient and wants costs and comparative benefits.

This underlines the role of UK business in making a genuine difference in a number of ways. An obvious starting point is that someone has to show global leadership.

If that sounds too optimistic, then a more sanguine approach might be that as impacts become worse, demand will increase for products and services designed for a warming world. Being a market leader then becomes hugely beneficial. One valuation of the world’s renewables market is more than $2,000,000 million by 2025! There will be matching opportunities in food chains, health products, green manufacturing and many other sectors.

Through an expert partnership between East Lancashire Chamber of Commerce, North & Western Lancashire Chamber of Commerce, Businesswise Solutions Limited and BOOST, the Programme helps companies to break into these sustainable markets at the right level. Specifically, we provide low carbon technology expertise in three separate but integrated areas.

The first is on-site power generation where we can introduce you to low carbon technology adopters, while also arranging for you to view demonstration sites, attend showcase events and apply for funding if you want to invest in renewable energy on your own site.

The second provides product innovation support and design verification, helps you to establish product readiness and meet a local manufacturer able to help you start production. Our team will guide you in taking your product to market and finding your demonstration customers.

“When companies want effective business support, meeting the right people can be a daunting challenge in unknow territory,” Darren explains. “We compare individual needs against a panel of selected manufacturers and then make carefully-match personal introductions,” he adds. 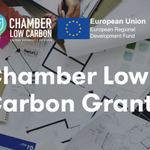 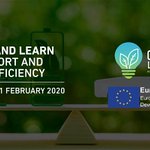 Our next FREE Lunch & Learn: Transport & Fuel Efficiency is on 21st February. To sign up, click the link below 🚚